Lille defender Gabriel Magalhães is set to join Arsenal, with Napoli having ‘resigned’ themselves to losing out on the Brazilian.

That’s according to Corriere Dello Sport, who say that money, and Arsenal’s last-minute push for the signing have ended up swaying the centre-back’s thinking.

As you’ll know by now, Gabriel has been on the verge of a move away from Lille for several months after earning himself attention around Europe with his impressive performances.

Everton appeared to have won the race for his signature earlier this year before COVID-19’s impact on their finances saw them pull back on a deal.

That saw Napoli race to the front of the queue for his signature as they sought out a replacement for Kalidou Kouliably.

A move to Naples looked all but certain until the last week when Arsenal emerged to steal a march and try to wrap up a deal.

The rumours have moved quickly since then, with reports in England stating that he had a medical on Friday and is ready to sign a five-year deal.

That would suggest a move to Napoli is not happening, and Corriere share that sentiment, saying that the Italian side have ‘resigned’ themselves to missing out.

They explain that Arsenal have always ‘been on the phone’ to Gabriel, who was left ‘stunned’ by manager Mikel Arteta’s ‘insistence’.

That’s backed up by Il Mattino, who say the Gunners have taken a ‘decisive stance’, which helped negotiations take off quickly.

Gazzetta Dello Sport say similar, claiming that the defender’s agent has also made it clear that Arsenal have ‘presented Lille’ with a bigger offer than Napoli’s, hence why it is now likely he will move to the Emirates instead. 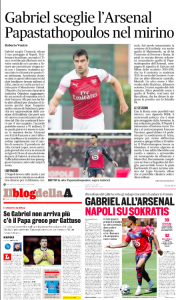 That is undoubtedly what Napoli think will happen so they are looking at alternatives and, at the top of the list, is Arsenal’s Sokratis Papastathopoulos.

All three newspapers name him as a target in their coverage of the Gabriel u-turn, with Corriere stating that he is a ‘viable option’ for the Italian side.

They explain that the defender has already held talks with Gennaro Gattuso between Wednesday and Thursday, with the pair enjoying a solid relationship having been teammates at Milan.

This is backed up by Il Mattino, who say Napoli are looking at ‘different solutions’ for the role but Sokratis is ‘first of all’ in their thinking.

Gazzetta meanwhile, state that the Sokratis would be ‘well disposed’ to the transfer and ‘operations are in progress’ about a move should Gabriel end up turning them down.