Much like Chris Smalling, Henrikh Mkhitaryan’s future at Roma is a big question mark.

The Arsenal loanee arrived in Italy’s capital on a ‘dry’ loan, meaning there was no option to make the move permanent for the Serie A side during his spell with them.

For a while, that looked like a wise move, as the player has spent the vast majority of his time injured.

There were articles suggesting his time with Roma was looking like a failure, and yet, with one good performance since returning from injury, we’re now talking about him potentially staying.

It’s nothing major, with no real information, but there is a feeling that if the Serie A side can turn their form around and creep into the top four, transfers that seemed unavailable could be done.

That’s what Corriere dello Sport on Tuesday suggest, explaining that ‘Miki’s future passes through the qualification for the Champions League’. 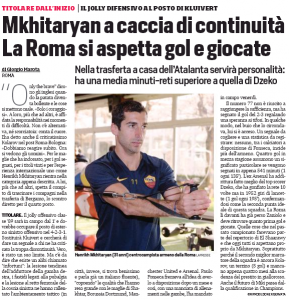 There have been whispers about this before, as his contractual situation at Arsenal (one year left in June) and his age (31) make him a potential cheap transfer for Roma, as he remains prolific when fit, currently their joint third top scorer in the league (with an injured Nicolò Zaniolo) after Edin Džeko (10) and Aleksandr Kolarov (5), with four goals.

However, if they don’t qualify, they’ll need to be more frugal with their spending, and splashing even a little cash on an injury prone ageing forward isn’t the best investment to make when your funds are limited.

There’s still a strong chance of it happening if Roma can improve on their current form (one win in their last six league games), as they are just three points behind fourth placed Atalanta with 15 games to go.