Over the course of February, and a bit of March, the hypothesis that Marseille could make a summer move for Olivier Giroud surfaced.

Of course with the Arsenal striker signing a new deal until 2020, the deal always seemed unlikely, although the player himself refused to rule out a move to Marseille in the future when asked about it earlier this month.

Still, with Marseille wanting a striker capable of helping compete with the likes of Monaco and Paris Saint-Germain, the 30-year-old, who knows the league well, would certainly be a good signing to aid such ambitions. 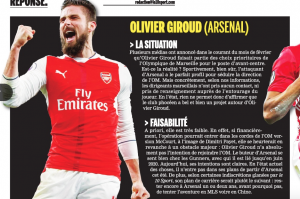 However, Le10 Sport explain in their monthly magazine the Ligue 1 club never once approached the Arsenal striker, nor did they enquire about his availability, suggesting they are indeed looking at other targets for next season.

Furthermore, the French publication reveal that Olivier Giroud’s plan for the future doesn’t include a return to France, with the forward planning on staying at Arsenal for the next season or two, before trying his hand elsewhere, with the MLS or even China destinations intriguing the France international.

Despite scoring a goal every 102 minutes for Arsenal this season, the former Montpellier goalscorer has seen his game time at the Emirates reduced, with Arsène Wenger preferring to use Alexis Sanchez through the middle more often than not, relying on Giroud as an impact striker instead.

Despite this, the player has scored 12 goals and assisted teammates six times in 27 appearances this season, of which only 12 were starts.