AMK Spor claim Galatasaray officials are in the market for a forward to support Bafetimbi Gomis and an agent has offered them a chance to sign Lucas Perez from Arsenal.

The Spanish striker didn’t enjoy the best of times on loan at Deportivo La Coruna in the last campaign after his team were relegated from La Liga.

According to AMK, the Arsenal player wants a fresh start and Galatasaray could offer him that chance. However, the final decision will be made by the Turkish champions’ manager Fatih Terim.

Terim has previously stated he needs a versatile striker who can play anywhere across the attack and Perez fits this profile. 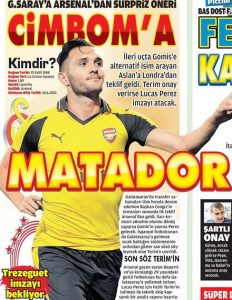 It’s claimed the Galatasaray scouting team have presented a detailed report to Terim about the Arsenal forward and the 63 year old is now considering signing the player.

Some Arsenal fans have hoped Lucas Perez could have a new chance under Unai Emery, and it could all depend on how attractive any offers are.