Over the past two years, Olivier Giroud’s status as France’s number one striker has rarely been disputed by his manager, Didier Deschamps.

Booed by his country’s fans in Nantes during the Karim Benzema saga, the Arsenal striker stood firm and established himself as the go to guy, forming a great partnership with Antoine Griezmann.

However, the times they are a-changin’, and Giroud’s spot is now seriously under threat.

Le Parisien point this out, even if it was obvious when Deschamps decided to start Alexandre Lacazette against Bulgaria, yet the fact the target man only came on in the 85th minute says a lot. 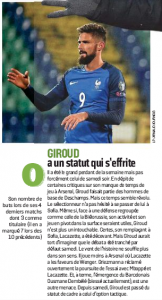 The emergence of Kylian Mbappé also hasn’t helped, and his lack of game time, which wasn’t all that much of a worry before, is now starting to become a big issue for his national team manager.

That, and the fact he hasn’t scored in his last four games for France, having put the ball in back of the net seven times in his previous 10, seals the deal.

As the French newspaper put it, ‘since Saturday, Giroud has gone from being a key player to a tactical option’.