Sabah claim Besiktas still haven’t extended Oguzhan Ozyakup’s contract because the club are looking to remove the sell-on clause they agreed with Arsenal.

The Turkish newspaper say Besiktas have offered €1m to Arsenal to remove their 30% sell on fee.

The former Arsenal player has another year left on his current contract, and Ozyakup recently confirmed he would like to test himself in a major European league.

If he does decide to leave Besiktas will want to make big profit from a player who cost them €500k four years ago.

Sabah say despite the initial €1m offer to Arsenal, Besiktas are willing to negotiate with the Gunners, and that both club’s will hold talks in the coming weeks. 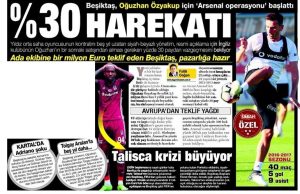 Ozyakup has been a regular in the Turkey national side since his move from the Emirates. He is one of the leading players in the Turkish top flight, and is the current Besiktas captain.

Given all of that, €1m for 30% of a future transfer fee doesn’t sound so great a deal for Arsenal.

Everton now just €5m away from asking price – Toffees can...

Leeds owner involved in consortium to buy Serie A club –...