It’s incredible how the World Cup can suddenly change the way players are seen in the transfer market.

A couple of months ago, Porto midfielder Hector Herrera wasn’t a big deal in the Portuguese newspapers, having one or two mid-table Spanish clubs being linked to him every month.

But now that the 28-year-old is doing great for Mexico at the World Cup, even Real Madrid are said to be interested in signing him.

On Wednesday, several Portuguese outlets have stories on Herrera’s future, most of them covering news from Spain about a chase from Betis.

But Correio da Manhã adds a few clubs to the list of interested sides, and claims that only in the Premier League, Arsenal, Everton and West Ham have all ‘shown signs’ that they could go for him this summer. Roma would be another one. 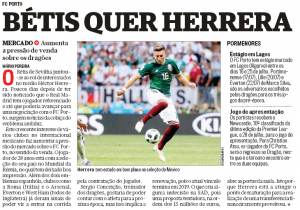 Porto are demanding at least €15m for his sale, mostly because there’s only one year left on his contract with the Dragons.

Newspaper O Jogo claims that Herrera is not joining ‘the first club who knocks’. They say that goes especially for Betis, who are not seen as an attractive destination, as the player would rather stay at Porto than join such a side.

That could be a wages thing, and all of Arsenal, Everton and West Ham would offer more.