For the past few months, Arsenal have been repeatedly linked with Thomas Partey.

On August 17th, AS explained the Gunners are the ‘most insistent of suitors’ for the Atlético Madrid player.

The 27-year-old has a €50m buyout clause in his contract, and the La Liga side have been trying to increase his clause and salary, without any success so far.

A week ago, Sport reported the Spanish side rejected the Premier League club’s offer of €25m plus Mattéo Guendouzi for signing the Ghana international.

It was also stated the midfielder is yet to make a decision on his future and the north London club’s desire to sign him has kept Los Rojiblancos in ‘suspense’.

Diego Simeone’s side have made it clear that any club wanting to sign the player must pay his €50m release clause. 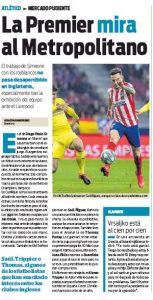 Tuesday’s edition of Sport once again talks about Arsenal interest in Thomas and reiterates Atlético’s firm stance on the asking price.

According to the report, Mikel Arteta’s side have ‘withdrawn’ from making a bid for Thomas Partey because Arsenal ‘don’t intend to pay the €50m demanded’ by the Madrid based club.