Featuring in four of Arsenal’s past five league games, it’s fair to say that Laurent Koscielny is back.

The centre-back, who missed the end of last season, the World Cup and a chunk of this campaign with an Achilles tendon rupture, has proved his lengthy recovery did the trick, and he’s intent on finishing the season (at least) with the Gunners.

This is what Le10 Sport claim in their magazine, explaining that Thierry Henry, his former teammate for a month back in 2012, was interested in bringing him to Monaco.

An approach is said to have been made, which Koscielny politely declined, still working on his recovery at the time. 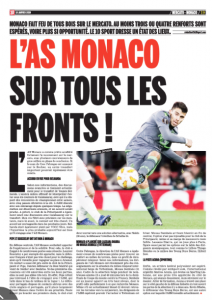 Monaco then moved onto other targets, giving Besiktas’ Pepe a go (who eventually ended up back at Porto), eventually signing Naldo from Schalke 04 to add some experience to a young and struggling defence.

Since joining Arsenal back in 2010, Laurent Koscielny has featured 330 times for the Gunners, scoring 24 goals and picking up five assists.