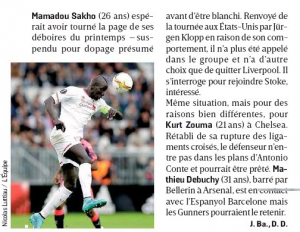 Arsenal’s Mathieu Debuchy spent the second half of last season on loan at Bordeaux, and could be heading out on loan again.

Espanyol are keen on signing the Frenchman on loan, and are already in contact with Arsenal, reports L’Equipe on Wednesday.

However, Arsenal could decide to keep him as a cover. The former Newcastle star has lost his place in the team to Hector Bellerin, and it remains to be seen if he’d want to stay or go elsewhere for regular playing time.

Arsenal have already agreed to loan out Calum Chambers to Middlesbrough, so Arsene Wenger might want to keep Debuchy.

The 31-year-old lost his place in the France national squad after his Arsenal woes, and was then injured after going on loan to prove his fitness and ability ahead of Euro 2016.

Debuchy has another three years left on his contract at Arsenal, and it’d be interesting to see how this works out tonight.