Arsenal are reportedly one of the clubs interested in signing Franck Kessie.

Loaned from Atalanta to AC Milan until the end of the season, the midfielder is signing permanently for the Rossoneri in the summer, as they have a €20m obligatory buying clause in the contract.

Now newspaper Tuttosport says although the player has been doing well, the Italian side could soon sell him due to the immediate profit he would give them.

Milan reportedly believe Kessie could be worth €40m, giving the club a plus of €20m and making them fine with financial fair play. 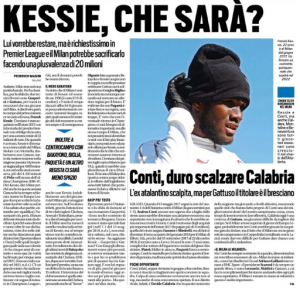 Arsenal are mentioned as one of the Premier League clubs who could bid for him and reach this amount expected by the Italian side.

Tuttosport says although Milan haven’t put a selling sign on Kessie’s back, they will have some thinking to do in case a bid for him arrives in the summer.