Arsenal are one of the clubs interested in FC Porto’s Jesús Corona, according to reports from Spain.

The 28-year-old’s performances and the time left on his contract [expires in 2022] has caught the attention of several sides.

Corona has a €25m release clause in his contract that’s valid until July 15th, and the report states it’s ‘not a very high figure’ for a club in the Premier League. That’s when Mikel Arteta’s side are mentioned, and them making contact with his representative.

Despite Arsenal’s approach, the player ‘wants to play for Sevilla’, and communicated the same to them, during the talks between the two parties.

The La Liga side have made it clear they have a firm interest, but cannot carry out any negotiations to complete the deal. That’s because Julen Lopetegui’s side are waiting to raise funds through player sales before deciding to bring in new faces to the club. 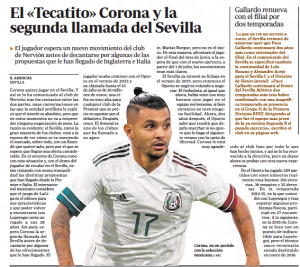 Corona is aware of this situation, and with his desire to play for Sevilla, his camp are ‘dealing with the different proposals that have come from the Premier League and Italy with great tranquillity’.

Arsenal are in the mix, but the Porto man is waiting for Sevilla’s decision before opting on one of the proposals he has received from England and Italy.