A month ago, Sport explained Barcelona ‘like’ Arsenal’s Gabriel Magalhães and are ready to offer some of their players as part of a deal to sign the defender.

It was then explained the one player the north London club ‘like the most’ is Memphis Depay.

Fast forward to May and today’s edition of ABC provides a short update on Arsenal’s effort to sign the forward in the summer window.

Xavi Hernández’s side will finish this term in second spot. They will now ‘start the exit operations’, and hope to get rid of players not included in the manager’s plans.

The Netherlands international’s name is included in the transferable list and Arsenal are named as one of his suitors. He arrived at the Camp Nou as a free agent last summer, when Ronald Koeman was in charge at the club.

Depay’s contract expires in 2023 and ABC state it would be a ‘great deal’ for Barca to cash in from his sale in the coming weeks and months. Regarding the Gunners, the report states they have ‘asked about him’.

ABC’s report comes days after Fichajes.net stated Mikel Arteta’s side are among the clubs interested clubs in the Dutchman. 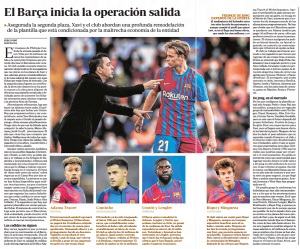 Arsenal are ‘aware’ of the situation with the former Lyon man at the Catalan club.

The Gunners qualifying for the Champions League will be ‘key to seducing’ the player. Arsenal are fifth in the table with 66 points, trailing fourth placed Tottenham Hotspur by two points.