Youri Tielemans has not yet found an agreement with Leicester City to extend his stay at the King Power Stadium beyond 2023, when his current deal is set to expire.

Last month, reports in Belgium indicated Arsenal and Manchester United are in the mix to sign the midfielder.

Belgium settled for a 2-2 draw against Ireland in their last friendly and Tielemans captained De Rode Duivels at the weekend.

Het Belang van Limburg takes a look at the ex-Monaco man’s situation this season, both with Belgium and Brendan Rodgers’ side. After mentioning about the country, the report says ‘things are not going well at Leicester either’ for the player.

The most logical explanation is ‘transfer issues’. It’s stated he considered leaving the club last summer, but them slapping a €70m price tag on him put off his suitors. Therefore, the player has not renewed his contract with the Premier League side.

Tielemans could leave his current employer as a free agent next year or hope the Foxes drop the asking price in the summer. He doesn’t want the free transfer option, because he’s ‘far too grateful’ to Leicester, but he also wants to play in the Champions League. 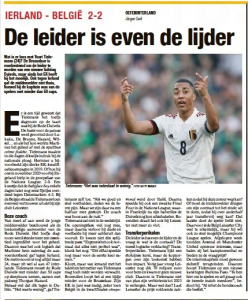 According to HBVL, Arsenal and Manchester United ‘showed interest again’ in the midfielder ‘last week’.

A move to either of the club depends whether they will qualify for next season’s Champions League and if they are willing to meet Leicester’s demands.

Arsenal are fourth in the table with 54 points and are four points ahead [plus a game in hand] of sixth placed Manchester United.