Home Premier League Arsenal Chelsea and Arsenal have both made ‘approaches’ to sign same player in...
SHARE

On Tuesday, Eric García confirmed he has made the decision to leave Manchester City when his contract at the Etihad expires at the end of this season.

Barcelona are set to be his next destination after they failed to acquire his services in the last two windows.

Arsenal and Chelsea also looked at the possibility of signing the defender on a free transfer in the next market. That’s what Sport are reporting today.

It’s claimed that in recent months, Pep Guardiola’s man ‘received approaches’ from various clubs and that includes attempts from the Gunners and Thomas Tuchel’s side.

The Spain international, however, decided not to negotiate with either Arsenal or the Blues because his desire is to complete a switch to the Camp Nou in the summer. 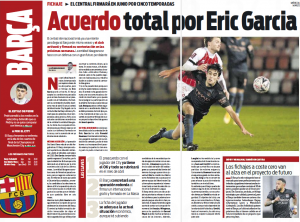 Mikel Arteta’s side wanting the centre-back was already reported in the past, with Chelsea now becoming the latest club added to the list.

Given Sport is a Catalan newspaper, there’s every chance Arsenal and Chelsea are being dragged into the picture to make Barcelona’s transfer victory look as impressive as possible.