Home Premier League Arsenal ‘Arsenal among them’ – Gunners keen on signing attacker, €50m so may...
SHARE

Barcelona signed Malcom from Bordeaux last summer and he struggled for minutes in his first season at the Camp Nou.

His playing time will be further restricted following the arrival of Antoine Griezmann and Mundo Deportivo has a report headlined: ‘Finding destination for Malcolm, the priority’

It’s claimed the Blaugrana’s priority is to resolve the Brazilian’s future and there’s interest from Premier League clubs, with ‘Arsenal among them’. The 22-year-old is also attracting interest from clubs in Italy and Germany.

Mundo claims Malcom, through his representative, has already communicated to Ernesto Valverde’s side about his desire to leave the Spanish champions in the ongoing transfer window.

Barca are looking for a fee of around €50m for the player and the preseason tie against Chelsea could be his last appearance for the Catalan club.

Journalist Miguel Rico’s report from today’s edition of Mundo also claims Unai Emery’s side have informally asked about Malcom with Barca, and he mentions interest from Everton.

However, there’s no official proposal for the South American. 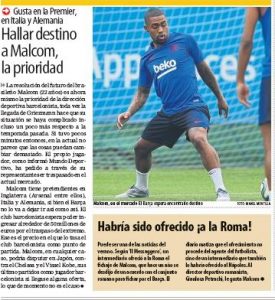 With the asking price at €50m, and with some claims even stating €60m, Arsenal would likely insist on a loan first.