Having qualified top of their group in the Europa League, the last 32 draw saw Manchester United having to face and beat Club Brugge if they were to continue in the competition.

Only one leg has been played so far, with Ole Gunnar Solskjaer’s men travelling to Belgium for a game that ended 1-1.

It was a decent result for the Premier League side, who scored the away goal they would have wanted, but for the fans who travelled with the club, the experience wasn’t great.

Following the game, the Manchester United Supporters Trust wrote an open letter to the mayor of Bruges, complaining about the ‘deplorable treatment’ they faced during their time in the city, explaining ‘fans were in genuine fear for their safety’ and labelled it ‘the worst experience of a European away game they’d had for many years’.

Police allegedly informed taxi drivers to stay away from the ground, forcing fans to walk in ‘horrendous weather conditions’ to the stadium, while some had been ‘deliberately sent in the wrong direction on long detours’.

The letter included other complaints, which Bruges’ mayor, Dirk De Fauw, has since responded to, somewhat surprised at the claims.

Relayed by HLN, he said: “The same arrangement applies to all European games. We wanted to keep the Brugge and United supporters separate. That is why the visiting fans had to walk to the stadium.

“That the exits were closed is a standard procedure for risk matches. The fans have to stay a little longer, stay in the stands, again to keep the supporters of both teams apart.” 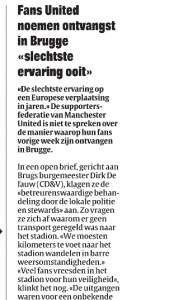 Despite De Fauw insisting the arrangements were standard, prior to the match it was made clear in the Belgian media that there’d be heavy duty policing of Manchester United fans, with there being worries after trouble between the two sets of supporters in 2015.

Back then, despite 57 United supporters being arrested (many for simply having no ticket, and others after they’d been attacked in Bruges), Dirk van Nuffel, the chief constable of Bruges police, was quoted by The Guardian as saying: “My general impression of the Manchester United fans was very good, especially the ones at the match.

“They drank a lot but that is an English tradition. On the whole I was very satisfied with them.”