Home Premier League From Argentina: West Ham have player ‘in their sights’ – Club would...
SHARE

Argentine newspaper Olé today has a story about all the stars who could leave the Buenos Aires side soon, with a special mention for those who could give the club a big profit.

Montiel is one of them, since River Plate own 85% of his rights, which believe it or not, is a big share if compared to other players in the squad.

They say the 23-year-old is wanted by Italian, Spanish and ‘even’ English clubs. Valencia and Betis are the La Liga sides who’ve been following him, while West Ham have the player ‘in their sights’. 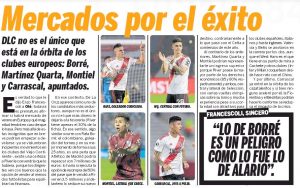 When seeing this story today, we checked how many articles we’ve covered about Montiel so far, and it turns out West Ham are being linked to him at least once a month since January.

Previous reports from the Argentine media said there was an attempt from the Hammers to sign the player in the winter transfer window, but that was blocked by River Plate.

Montiel is protected by a €20m release clause.

Chelsea player no longer ‘fundamental’ – Blues could accept less than...