The reason Marcelo Bielsa hasn’t been announced as Leeds United manager yet is because the paperwork is currently being reviewed, reports El Dia.

There is ‘total agreement’ between the two sides of negotiations, and a source close to the manager has explained things are now ‘in the contract review stage’.

Once that is done, Bielsa will sign a one year contract, with the option for a further year, and Leeds United will announce the appointment.

El Dia explain negotiations have been ongoing for two months and before agreeing to get into full negotiations with Leeds, Bielsa and his coaching team watched ‘hundreds of videos’ of the Leeds players. 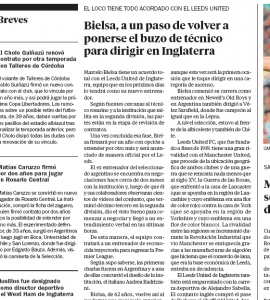 There’s a verbal understanding between the parties, and now it’s time for the paperwork.

Leeds United owner Andrea Radrizzani is said to have travelled to Argentina to hold talks with Bielsa, and that’s when things really got going.

El Dia dedicate the second half of their article to explaining the rivalry with Manchester United, telling their readers it started with the War of the Roses, was boosted during the Industrial Revolution, and continues to this day.