Argentina have given Edgardo Bauza public backing, but Ole believe the national manager will be out of a job soon. It’s not a matter of when, but if, and Ole are more than confident in their claims on Friday.

The man chosen to replace Bauza will be Jorge Sampaoli, currently manager at Sevilla. He’s not the only candidate, and Tottenham manager Mauricio Pochettino is said to be liked by those in charge of Argentina’s national set-up.

Last year, a European newspaper doing a feature on Pochettino sent a journalist to the manager’s hometown of Murphy. There, a family friend called Maco sounded positive about the Tottenham boss one day taking over the national side: “I think he wants to lead 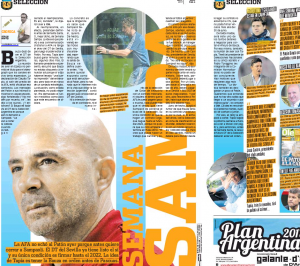 the national team. I think so.”

Now probably isn’t the time, and Pochettino isn’t first choice anyway. One of the barriers to getting Sampaoli, and doing so quickly, is compensation Argentina would have to pay to Sevilla, and Bauza’s severance package.

To get Pochettino from Tottenham would cost much, much, more.