Premier League side Everton are one of the clubs who are chasing the River Plate star Nicolás De La Cruz, according to reports from the Argentine media today.

Newspaper Olé says the Toffees have been in touch with the player’s representatives, and could soon be making a move to sign him.

The outlet says that Everton are one of the two clubs who’ve been in talks with his entourage lately. The other one is from Germany, and even though it’s been reported it could be Borussia Dortmund, the agents claim it’s another Bundesliga side.

De La Cruz is protected by a release clause of €22m, but Olé considers is quite unlikely that any club would spend that much on the signing. 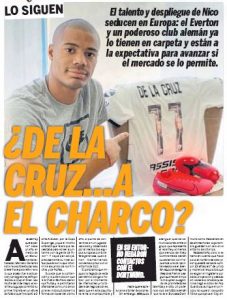 That’s bad news for River Plate, since they only bought 30% of the player’s rights when signing him from Uruguayan side Liverpool back in 2017.

Olé writes that the clubs will move for De La Cruz ‘if the market allows them too’, since the Coronavirus pandemic should affect the next transfer window.

The newspaper also calls Everton a club ‘from the Premier League’s second line’, and says it’s been a while since the Toffees have targeted the 22-year-old.