Home Premier League From Argentina: Club ‘waiting’ for offer so they can ‘close deal with...
SHARE

Newspaper Olé today have a story which is actually about midfielder Juan Quintero, who could soon get big offers to leave the Buenos Aires side.

But instead of being concerned with his possible departure, it’s said River Plate are actually more focused on the sale of Gonzalo Montiel.

The Millonario are waiting for the offers the agent has so they can ‘close the transfer to West Ham’, Olé claims. 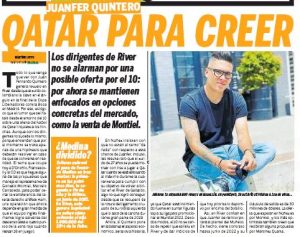 The outlet says the operation really depends on West Ham’s future in the Premier League, as the deal will only happen in case the club avoid the relegation to the Championship.

The report doesn’t bring any information on how much would Montiel cost this time.

Last week, Sport Witness managed to reveal that back in January, West Ham offered €1m for a loan deal plus an option to buy the player for €10m, and that same amount (€10m) would be enough to take him in the summer.