It’s reported Gala’s interest in Trezeguet became obvious when his former teammate Mbaye Diagne posted a photo with him and the Egyptian photoshopped in a Cim Bom jersey.

Fanatik say the Super Lig club’s board are looking to reunite Diagne and Trezeguet, after the players formed an impressive partnership when they were at fellow Turkish club Kasimpasa.

However, yesterday there were reports Fenerbahce were closing in on the player and were close to announcing his arrival. 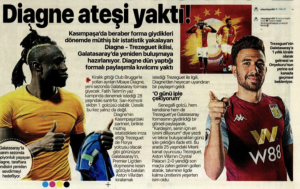 The 25 year old has been a regular in Dean Smith’s side, who are in the relegation zone with three games to play.

Trezeguet has made 38 appearances for Villa in all competitions this season, scoring six goals. He scored a brace last weekend against Crystal Palace to keep Aston Villa’s hope alive.

With a contract at Villa Park expiring at the end of June 2023, it’s likely the Turkish sides interested will try for a loan move rather than a full transfer.