After beating Juventus 2-1 in Turin in the Champions League, there was a buoyant mood around Old Trafford, as it seemed, for a split second, that José Mourinho had somehow managed to turn things around at Manchester United.

Then came the derby where, without Paul Pogba, everything came crashing back down to reality as his side were outclassed by Pep Guardiola’s Manchester City.

While the Juventus win will have got the critics off his back for a short while, they’re now back in full force, and so are the rumours of Manchester United thinking about what happens after Mourinho’s gone.

Gazzetta dello Sport, loyal to their countrymen, firmly believe the Red Devils are ‘truly thinking’ about Antonio Conte for the post-Special One era, as the former Chelsea manager now sits around waiting for the right opportunity to return into a job. 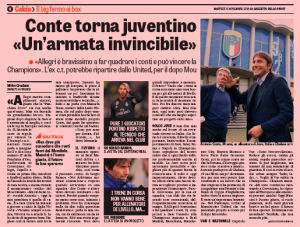 If the past is anything to go by, Manchester United will most likely wait until the campaign is almost over to make a decision on José Mourinho’s future, or, if things really go pear shaped, do so when it’s mathematically impossible for them to get Champions League football next season.

There’s a long way to go, but the Red Devils already have a seven point deficit on Tottenham in fourth, and we’re only 12 games in.