Ole Gunnar Solskjaer appears to have upset some AS Roma supporters ahead of Manchester United’s Europa League clash against the Italian side this week.

When the manager secured his side’s passage to the semi-finals, he was asked about facing Roma, and said he didn’t know too much about the team, although he pointed out Edin Dzeko would be a big threat.

Solskjaer went on to say the match would be a big European tie, given Roma are a club with a lot of history.

Somehow, that’s been taken by some Roma fans as the Manchester United dismissing them, and a string of posters have appeared outside the Italian club’s training ground.

There’s an image of the Norwegian with the following quote attributed to him: “I don’t know them and I haven’t seen them play.” 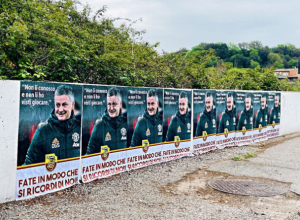 Roma’s players are then encouraged to make sure Solskjaer knows them after the Europa League match.

La Roma24 report it, along with TMW and others, and it’s all added motivation for Paulo Fonseca’s side ahead of their trip to Manchester.