Maxi Gómez arrived in Europe in 2017 and spent two seasons at Celta Vigo before completing a move to Valencia in the summer.

Prior to his switch to the Mestalla, West Ham United made almost desperate attempts to get the striker’s services.

He had a release clause of €50m in his Celta contract and reports from Spain suggested the Hammers were willing to offer €55m to the La Liga side for the Uruguay international. The player rejected them and joined Los Ches.

Gómez told AS in August why he turned down Manuel Pellegrini’s side for Valencia: “Because Valencia is a team that I like. I love La Liga. Once they showed interest in [signing] me, I said ‘yes’. It’s a big team, with history.”

Valencia host Lille in the Champions League tie later today and Tuesday’s edition of AS claims ‘Maxi Gómez signed for Valencia attracted by nights like today.’ 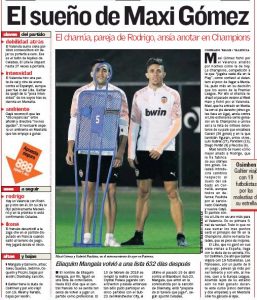 The newspaper then go on explain Gómez’s desire to play in Europe’s elite club competition was  why he ‘rejected’ West Ham.

The Hammers ended up signing Sébastien Haller and he’s scored four goals in 10 matches, while Gómez has five in 11 league appearances.