The Portuguese media continues to be pretty excited with the chances that Porto have to sign Rangers striker Alfredo Morelos this summer.

Since there haven’t been big developments in the pursuit for now, newspaper A Bola today managed to find another way to have a big story about the Rangers star.

The outlet had an interview with Pedro Sarmiento, who used to coach Morelos at his first club, Independiente Modellin. He highlighted the potential the player had back then, and now approves a potential move from Rangers to Portuguese football.

“I think he had a fantastic growth between Finland and Scotland, it  gave him the baggage to reach a club like FC Porto, of another level,” Sarmiento told A Bola.

“I sincerely hope that he continues to grow, supported by what Falcao and Jackson have done. He’s humble and has a lot of ability to evolve. I also believe that it can be a first-line option at the national team.” 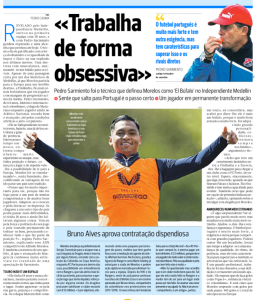 “It’s something amazing! See someone who left very young but has matured a lot in a strange environment. It helped him, gave him confidence and security. Portuguese football is much stronger, the requirement is different because he’ll compete with great players.”

“It may cost him a little, it will take time to adapt to a change in quality, rhythm, power, but he has the characteristics to overcome that and also the opponents who will reference him. He’s a great professional, obsessively working on his finishing and will certainly be helped a lot. They’ll expect him to score goals like the 9 that he is.”

The Portuguese media is today also full of quotes from former Rangers defender Bruno Alves, who in a chat with the Scottish press, was also supportive of Morelos’ potential move to Porto.

Back on Monday, newspaper Record claimed the striker ‘opens doors’ for a move to the Dragons, but there have been no official talks between the clubs so far.