Ah, the international break, so often the Achilles heal of club managers and their planning.

That stretched intro brings us straight to Laurent Koscielny, and a headache Arsene Wenger could do without. With Olivier Giroud sent home from the France squad over the weekend, suffering from his own injury, Arsenal probably thought that was the end of their bad French luck.

Perhaps not. Koscielny wasn’t in full national team training on Sunday because of ‘recurring pain in an Achilles tendon’, report L’Equipe, which doesn’t sound like a great situation midway through the season.

The Frenchman’s Achilles heel is a long standing Achilles heel, and something which he’s admitted will have to be managed for the rest of his career. 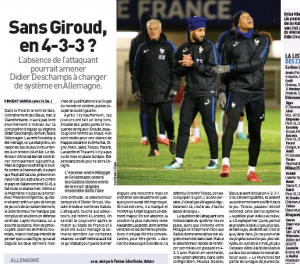 Whilst the Arsenal defender could be left out of France’s match against Germany on Tuesday, nothing is certain. There’s no guarantee Koscielny will even return to training given the issue, and whilst Didier Deschamps is continuing to count the player as part of his squad, returning with Giroud could have been the better plan.

There’s no use in risking Koscielny even in training for the match, but then sense around these situations is often hard to find.