Liverpool haven’t been their best version recently, with defeats in the Champions League, Premier League and FA Cup.

Jurgen Klopp’s men are still closing in on the title, and moved a little nearer thanks to Manchester United’s victory over neighbours City on Sunday.

Liverpool got a victory themselves, against Bournemouth, but again they looked below their best form, and that’s giving some confidence to Atletico Madrid.

Diego Simeone’s men have a 1-0 lead to protect at Anfield and the match is being looked forward to as a battle between Klopp’s swashbuckling attack and Atletico’s well drilled tactics.

However, it’s been made clear in Spain that the Rojiblancos can’t just rest on their one goal advantage, given such a plan led to them being knocked out by Juventus last season.

Marca have an article on Monday stating ‘The Anfield formula’, and it’s explained Atletico have a plan which involves attacking, and exploiting Liverpool’s ‘weaknesses’ in defence. 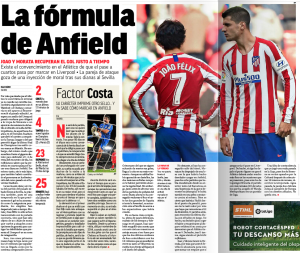 They drew 2-2 with Sevilla at the weekend, with goals from Alvaro Morata and Joao Felix, which is seen as a very good sign, after the attackers had been struggling to find the back of the net.

Diego Costa is also expected to play a part, and ‘sow panic’ in Liverpool’s rearguard, although it’s thought doubtful he can last the whole match.