Andreas Pereira had a so-so season in Valencia on loan. Whilst some Manchester United supporters were elevating his efforts much higher than they actually were, the Valencia local media were open in their doubts about the player.

There were also several interviews from Pereira which caused a stir, he claimed he’d left Manchester United against the wishes of Jose Mourinho and spoke openly about not wanting to go back during the January transfer window.

All of that is water under the bridge, and Pereira has a chance for a Manchester United fresh start. Speaking to Belgium newspaper Het Belang van Limburg, Pereira made it clear he still sees a future with the Red Devils.

“Breaking through Man U is and remains the big dream,” Pereira explained. “After two good seasons in Spain, I know that I can always go there. Valencia wanted to keep me, but at the moment my goals are in England. I want to make it at Man U. At Valencia I have proven that I can participate at the highest level. That’s what I hope to show in Manchester now.”

But will Mourinho be up for it or does the Portuguese coach hold a grudge? It’s all fine according to the young footballer: “I told him that I felt ready to compete. He was happy to hear that and said I would get my chance. Now we will see how it goes in preseason. Then we are together again, but of course I hope to convince him.” 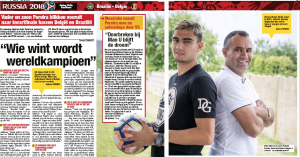 As for the other Red Devils, the Belgium national team, Pereira hasn’t quite made his mind up yet: “I keep both doors open for the time being. I was born in Belgium and I owe much to this country. Brazil is the land of my roots and family. Via Lukaku I have already heard that Martinez would like to speak with me.”