Ander Herrera has had a difficult first season at PSG, following his exit from Manchester United on a free transfer.

The midfielder has suffered from injuries on several occasions, yet he’s still managed to end the season as a Ligue 1 champion, with the campaign in France now called to an end due to the Covid-19 crisis.

Speaking to AS, the Spanish newspaper asked Herrera to give his assessment on his season with PSG, to which he replied: “Two quadriceps injuries, of a month and a half each, have prevented me from having continuity, but playing with some of the best soccer players in the world is a luxury. I am very pleased to accept the offer of one of the best projects in European football.”

Given he worked with Jose Mourinho at Manchester United, Herrera was asked if the manager is a fierce as he’s portrayed in the media: “I have been with him for more than two years and I have only words of thanks. He has character, but if you go head-on with him, you work and you don’t hide, you have no problems. He is fierce with those who aren’t honest.”

Herrera has played with Paul Pogba at Manchester United, so there was a good chance AS would ask about a potential move to Real Madrid for the French midfielder. 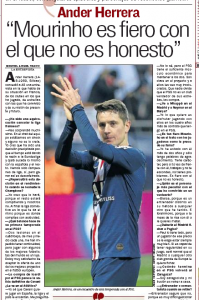 They did, and the angle of the question was simply whether the La Liga club should sign him, and Herrera suggested his former teammate needs consistency and to display his best football at all times: “Paul has it all, but a player of that price is required to be always very good. If he is able to have regularity in his game, it will be normal for Madrid or any other big club in Europe to want to sign him.”

Pogba has missed much of the current season due to injury, which will of course have restricted him from having any kind of consistency in his game.