On May 27th, we covered claims from Mundo Deportivo that Everton have Jean-Clair Todibo on their transfer ‘agenda’.

The Barcelona owned defender joined Schalke on loan in January and they had an option to make his transfer permanent for €25m.

Schalke sporting director Jochen Schneider has confirmed the deadline to exercise that option expired on May 31st.

Tuesday’s edition of Sport has a report on the centre-back and they state his future now ‘points to the Premier League’.

Everton are once again mentioned and according to Sport, Carlo Ancelotti ‘wants to recruit’ the 20-year-old for the Merseyside club.

It’s claimed the Toffees have already started contacts with Barca to try and reach an agreement for the Frenchman’s transfer. Even though there’s no agreement, Sport state Todibo’s future ‘points towards Everton’. 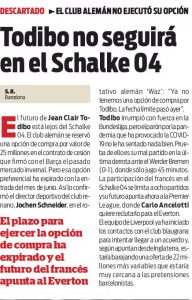 The newspaper mentions ‘they point from England’ that Everton would be considering an offer of €22m plus variables and this would be close to the fee demanded by Quique Setién’s side.

However, Sport‘s online edition states they received this information from a source close to the English club.

The report doesn’t mention the figure demanded by Barcelona for Todibo, but earlier reports have indicated it to be around €25m.