Pep Guardiola has used Oleksandr Zinchenko and Benjamin Mendy, along with right-back João Cancelo, on the left side of Manchester City’s defence this season.

Mendy has been restricted to more time on the bench since mid-December as the Citizens manager preferred Zinchenko ahead of the Frenchman in the left-back position.

The current situation has seen the Etihad club linked with Atalanta’s Robin Gosens.

For the past few weeks, there have been regular reports from Italy discussing the Premier League leaders making the 26-year-old their top target for the summer.

On March 5th, TuttoMercatoWeb stated Guardiola has followed the Germany international for ‘some time’.

Gosens has revealed his admiration towards the former Barcelona manager during an interview with Kicker.

“In general, I can never remember my dreams because I sleep so well. That’s why I can’t answer that exactly [last time he dreamt of Pep]. In general, however, this is a coach that I look to, who can raise you to another level in terms of football,” he said.

The defender also expressed his delight over the rumours linking him to Guardiola’s side and Juventus. On that topic, Gosens explained: “This is, of course, an absolute honour, there is no need to discuss it.

“When the European elite have you on their radar and they say that you might even be at the top of the list, that is gigantic and shows that you are on the right track and that you are consistently performing this season. It’s crazy – especially when you can see which way I went.”

Gosens’ biography titled ‘Dreams are worthwhile’ will be released on April 8th.

After explaining his decision to come out with a biography, the player was asked if the second edition with a ‘detailed Manchester City chapter’ could be published in two or three years. 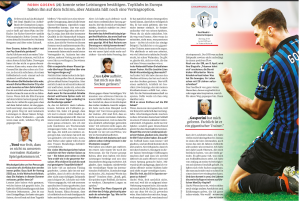 Responding to that, he said: “(laughs) If that is the case, there will surely be some other anecdotes and experiences that I would like to share. Who knows?”

Gosens has nine goals and five assists in 23 Serie A appearances for Atalanta this season.