After what feels like years of negotiating (even if it’s only been a couple of months), Joao Cancelo to Manchester City doesn’t seem any closer to getting done, as the Premier League champions refuse to pay the €55-60m demanded by Juventus.

You all know the situation by now, and that includes the Cityzens’ attempts to include Danilo in the transfer to lower the amount of money they would have to pay.

Juventus aren’t interested in the Brazilian, meaning we’re, once again, at a standstill.

So, what happens now? Well, Barcelona are back. Magic.

We’ve already said our piece on the matter a number of times, mostly because this just feels like attempts to put pressure on Manchester City, and Corriere dello Sport‘s article is no different. 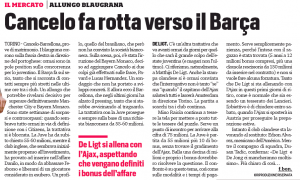 Why are we so sure? Well, this is the same Barcelona who are currently struggling to put the money together to sign Antoine Griezmann from Atlético Madrid.

Furthermore, they were allegedly three days late in paying their employees their June wages.

Does that sound like a club who have a spare €60m to throw at a right-back this summer?

To us, it just doesn’t, and regardless of how ‘tight’ the negotiations between Juventus and the Catalans are said to be for the Portuguese defender, we just don’t buy it.