Barcelona have ‘opened doors’ for the departure of Antoine Griezmann in the summer, according to Catalan outlet Sport.

Their front page story says the Camp Nou side want to recover part of the money they spent on him, and should now look for options in the transfer market.

Several Premier League clubs are pointed out as possible destinations, with Manchester United having an extra factor on their side.

It’s claimed that Arsenal and Chelsea are ‘alternatives’ for Barcelona to try a sale. In Manchester United’s case, they recall the Red Devils have already been interested in the Frenchman in the past. 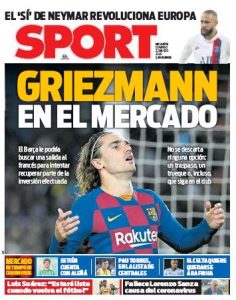 Barcelona are said to be looking for €100m when selling Griezmann. But there’s no final decision yet, so they may involve him in a swap or even keep him in the squad in case the offers aren’t good enough.

It’s said the dressing room were never convinced his signing would work, and the club now agree with that. They want to take money from his sale and spend it on better targets.