The Argentine media won’t stop running transfer stories about Leeds United, and the latest one is about Thiago Almada.

For the past few months, the winger has been heavily linked to a departure from Racing, since he’s been standing out at the club.

Several European sides have been reportedly following the 19-year-old, but there are some of his teammates who believe he’s not leaving Argentine so soon.

Racing midfielder Fernando Gago was interviewed by newspaper Olé this week, and claimed that Almada gave him his word that he’s not leaving the club this year.

“Everyone knows when it is time to go. But hey, he’s going to have to stay another year because he already gave me his word. If he doesn’t comply, I won’t let him leave the house”, Fernando Gago told Olé. 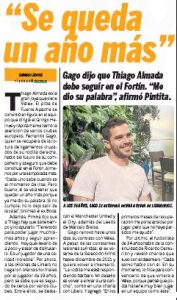 Olé fulfils the story saying Almada has been followed by several clubs, with the likes of Leeds United, Manchester City and Manchester United standing out.

The winger has been included in a few lists from the Argentine media which said Marcelo Bielsa is looking to sign several compatriots for his squad which will be playing the Premier League next season.

However, we’re still to see reliable reports about the Whites’ pursuit for the player.