Home Europe Leeds United signing to be made official ‘in next few hours’ –...
SHARE

As Leeds United fans continue to ask the club’s social media teams to ‘Announce Firpo’, in Spain the deal is seen as done.

Barcelona have been keen on sales this summer as they look to balance their accounts so they can ruin them again with a new deal for Lionel Messi. Junior Firpo was long one of the options to sell, given he’s not needed for Ronald Koeman’s first team.

There had been interest from Italy, but given Serie A clubs seem to only want to sign players on loan these days, it wasn’t a great solution for Barcelona.

Saturday’s edition of Sport reports Firpo’s move to Leeds is ‘already closed’, for €15m plus a further €3m in bonus payments. They say the move will be made official ‘in the next few hours’, once the player has gone through his medical tests.

That may not be the same as being announced, so don’t be surprised if the transfer isn’t plastered across Leeds United’s media today. And, in addition, Spain’s use of ‘next few hours’ often has an element of mañana to it. 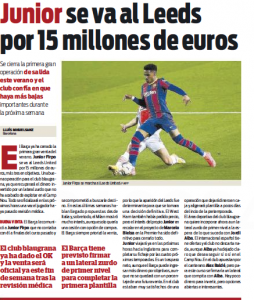 ‘Next few hours’ is used again as Sport say that’s when Junior Firpo will travel to England.

It would make some sense if he has his medical in Spain, as he has to quarantine once in England, and that’s what Nuno Tavares has done for his move from Benfica to Arsenal.