One of the more interesting sagas down Tottenham’s end during the summer/autumn sales of the transfer market was their pursuit of Milan Škriniar.

It took a few by surprise, because the Slovakian was, for a long time, considered one of the centrepieces of that Inter team, but Antonio Conte seemed happy to let him go at the right price, so negotiations were organised.

Tottenham came rather close to getting their man, with talks of an exchange involving Tanguy Ndombélé touted, but the defender eventually stayed in Italy, where he has found new life and returned to his previous status.

Gazzetta dello Sport make that clear on Friday, as they point out he’s been ‘freed’ by Diego Godín’s exit, and has now ‘even surpassed pre-Conte performance levels’.

They then remind their readers that Spurs ‘almost took him away in September’ when they offered €35m. 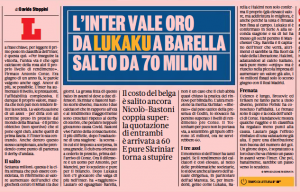 That figure would be laughed at nowadays, however, as Gazzetta explain ‘€60m would be needed’ to make Inter consider a sale.

It seems unlikely that Daniel Levy would go to those heights for Škriniar, but who knows what José Mourinho’s plans are these days?