The right-back agreed a five-year contract with the Citizens, which came into effect from July 2020. Two months later, he was sent out on a season-long loan deal to Girona.

Prior to agreeing a deal to join Pep Guardiola’s side, Barcelona were also interested in the defender. The Brazilian has now detailed the reason why he snubbed the Camp Nou side in favour of joining the English club.

“I almost signed for Barça. It was a matter of days. In the end I changed my mind and went to City to be trained by Guardiola, the best in the world,” Couto told Diari de Girona, as relayed by Sport.

Having struggled for regular minutes in the first half of this season, the 18-year-old has been featuring regularly for the Spanish club since the start of the last month.

The defender has impressed in recent weeks for the Segunda División side, managing a goal and two assists in the last eight matches.  Despite experiencing ups and downs while on loan at Girona, the player admitted he doesn’t regret the decision to join City.

“I made the best choice because City are growing every year and have become one of the best [clubs] in the world. It was a great opportunity. Besides, training under Guardiola would be a dream for me,” he said. 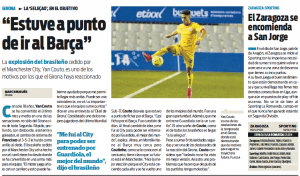 Couto will return to City after his loan spell at Girona and it remains to be seen whether he will get an opportunity to play under the order of the former Barcelona manager next season.