Marca believe Paul Pogba and Manchester United are coming to the end of their second relationship, and, perhaps surprisingly for the Spanish newspaper, they state it’s the Premier League club doing the ditching this time.

According to the claims, the Red Devils don’t believe the midfielder is returning enough on the club’s investment, and therefore doubt whether it would be worth giving him another big and long contract.

His injury issues and struggles with consistent form have played a part, and Marca say a stay at Old Trafford is now ‘almost ruled out’.

There are not many takers either, with the report saying a move elsewhere in the Premier League is very unlikely, and that the level of salary required, and the extra money Mino Raiola will request in terms of commissions and player bonus, is set to cause problems. 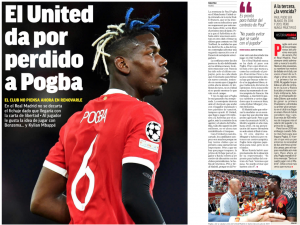 Unsurprisingly, they present this as an opportunity for Real Madrid, but make clear to say those in charge of the money at Los Blancos have never been convinced to fund a move for Pogba.

Marca’s headline is ‘United give up Pogba’, and the same message is carried on their front page.