There are multiple exits planned at Barcelona this summer, and Junior Firpo to Leeds United is just one of those.

Sunday’s edition of AS reports the transfer is ‘almost resolved’ and he’ll move to Elland Road for ‘about €15m’, with 15% of that fee going to Real Betis.

Mundo Deportivo say the transfer will be worth €15m, and they believe the deal is the ‘tip of the iceberg’ for Barcelona exits this summer.

Sport put the transfer fee at €15m plus a further €3m in bonus payments and they say the fullback was never really able to settle at the Camp Nou and couldn’t find his way to the first team.

They state he’s ‘waiting to pass the medical’ with Leeds United and can then sign his contract with the Premier League club. 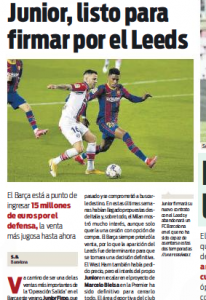 While they’re sorting out the fringes with Barcelona, it would not be a surprise if Marcelo Bielsa’s side are offered the chance to sign others.

Players such as Martin Braithwaite, Philippe Coutinho, Miralem Pjanic and Samuel Umtiti are all for sale, and Mundo Deportivo report the latter two have been told they can leave for free in this window.