Bought by Chelsea at Maurizio Sarri’s insistence, Gonzalo Higuain has been a bit of a disappointment since his loan arrival from Juventus.

The Argentine, who was already struggling at Milan, has shown little sign of turning his career around, relegated to the bench for the past two games, eventually coming on for the last 34 minutes against Liverpool.

Yet to be used for the Premier League side in the Europa League, Higuain could see a start on Thursday evening against Slavia Prague, as Chelsea go into the return leg with a 1-0 advantage, but even a good performance there probably won’t change much when it comes to his future.

Gazzetta dello Sport, looking at Juventus’ plans for the summer after yet another unsuccessful Champions League campaign, believe it’s ‘almost certain’ Chelsea will not make the 31-year-old’s deal permanent in the summer. 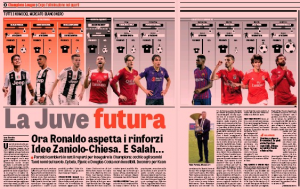 That means he will return to Turin, where the Serie A champions will have to decide what to do next, as it will be difficult to offload an expensive, out of form player who has two years left on his contract and isn’t getting any younger.

His Stamford Bridge exit could, however, be well received by Olivier Giroud, who has once again come out and openly discussed his frustration at the lack of first-team football he is receiving at Chelsea this season.

The Premier League club are still awaiting to hear the outcome of their transfer ban appeal.