Allan to Everton is now becoming a story which is covered almost daily in the Italian media.

From a signing which was not so long ago considered an unlikely dream for Carlo Ancelotti, it’s now taken very seriously, for a number of reasons.

Contract renewal seemed the motivation for the rumours at the beginning, with it being reported repeatedly last year that Allan fancied a new Napoli deal. He last renewed in March 2018, and with his status improving last season, a pay rise was desired.

Now there’s no talk of a renewal, and Allan hasn’t been impressing as much under Rino Gattuso. There’s been rumours about his application, yet that shouldn’t be seen as a black mark against the Brazilian, with every Napoli player having accusations thrown at them at some point this season.

Given the Gattuso problems, Allan has been seen as a Carlo Ancelotti man.

Everton’s current manager has been the subject of countless opinion articles from the media around Napoli, criticising him for all kinds of things. They never really took to Ancelotti in Naples, and it could be at least slightly related to the general antipathy in the area towards the North of Italy.

Here was this manager, from Emilia-Romagna, known for his coaching success with AC Milan and outside of Italy, coming to tell everyone how it was done. Anything other than instant and consistent success was never going to go down well, and it wasn’t felt that Ancelotti had the fire required of a Napoli manager.

Calabria born Gattuso is completely different, and being considered an Ancelotti man, as Allan has been, isn’t the best reference right now.

Corriere del Mezzogiorno, a regional Campania newspaper (Naples area) explains on Tuesday that Allan’s situation is the ‘most delicate’ for the squad. Last season he was ‘flattered’ by a ‘dizzying’ approach from PSG, and it’s claimed the French club ‘remain at the window’.

Despite it being stated there’s still interest, Allan was most linked to PSG when they were desperate to sign a defensive minded midfielder. They ultimately got that player in Idrissa Gana Gueye, from Everton, which would heavily suggest they’re not about to spend big again for someone who plays in a similar position.

Corriere del Mezzogiorno claim Everton are providing the ‘most insistent offer’, whatever that means, and it’s explained Allan ‘could be tempted’ by working with Ancelotti again.

Napoli, meanwhile, are ‘waiting’ for an offer ‘appropriate to the value it gives to the player’. 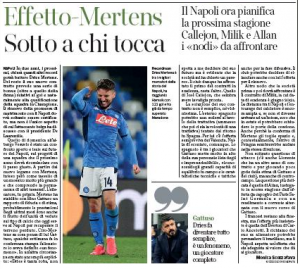 No figure is mentioned, so how much would be enough? Months ago, the figure of €60m was the most consistent when it came to the midfielder, yet yesterday we covered a claim from Italy which put it at €40m.

Napoli are already looking at alternatives, with AS Roma’s Jordan Veretout edged forward this week.

Allan to Everton isn’t a fantasy any more.