Alfonso Pedraza has this season shown he can be the ultimate modern left sided player.

When the 21 year old moved to Leeds United last season, on loan from Villarreal, he was very much considered a left winger.

Now on loan at Alaves, Pedraza started the season playing as a left back and did well there, but he’s now back further up the pitch and prefers that role. Pedraza has played on the left in a variety of different systems and proven he can handle the roles.

With a €20m buyout clause at parent club Villarreal, the youngster has been attracting admiring glances, and Marca have asked him about a potential move to the Premier League.

The former Leeds United player responded: “I try to be on the sidelines of all this because 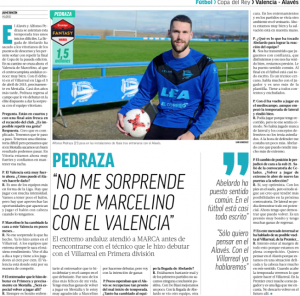 we are in full competition. I want to think about Alaves because we are in a delicate situation and that controls your head a lot.

“When the season ends we’ll see what Villarreal want to do. In the Premier I grew a lot as a player and it’s a league that I love. I don’t rule out going back in the future.”

Of course, Pedraza didn’t play in the Premier League, he played in the Championship for Leeds United, so the Spaniard will have been talking about England generally.

The Marca quotes are certainly more positive than when Pedraza has previously spoken about his Leeds United experience.

In June of last year, the footballer explained: “After Christmas came the option of going to Leeds. To play in the Championship was a good choice to keep growing. We decided to go and although it wasn’t one of my best experiences, I learned a lot and I improved both as a player and person.

I had a lot of confidence and then, at Leeds, everything went very quickly. I arrived in February, didn’t have time to adapt, the league was already in play and there were many matches. It took more, but it was an experience that helped me to grow.”