One of the clubs being edged into place in the Sanchez race is Juventus, and Turin newspaper Tuttosport is getting excited. In a big article in their Wednesday edition, Tuttosport say Juventus could raise €40m from two player sales and reinvest that money in Sanchez.

The hope would be that Simone Zaza to Valencia is made permanent, and that Bayern Munich take their option on Kingsley Coman, the latter scenario seeming likely.

The Turin newspaper believe Sanchez is set to say ‘Goodbye London’ and is looking for a big contract. Juventus have good spending power and may be encouraged to compete on wages if they can get a good fee.

Arsenal would scoff at the idea of receiving €40m for Sanchez, but the one year left on the player’s contract is a problem. Should Sanchez decide that Juventus is the place he wants to be then a bidding war would become diluted. 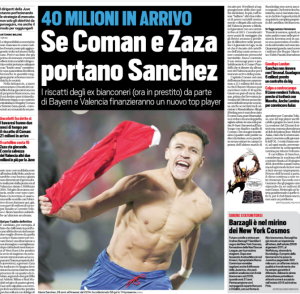 Arsenal’s situation with Sanchez is vulnerable and increasingly so. As the months without a renewal go by, baseless rumours will morph into genuine interest and eventually turn into approaches to the player’s entourage. A troubled renewal process is getting to the stage which sees timing slowly turning the difficulty up.

Juventus can offer competitive wages, near guaranteed domestic glory, and a good record in the Champions League in recent seasons. The club have built up a very impressive squad, and with the addition of Sanchez it would be further cemented as one of the best on planet football.