Reinier is a name we’re all going to be hearing a lot more of over the next few months.

The attacking midfielder currently plays for Flamengo and whilst he isn’t yet one of the club’s major stars, that can be forgiven given he’s still only 17 years of age.

Turning 18 in January, Reinier will then be able to make the move to Europe and there’s already been countless reports about interest in him.

Manchester City are one of the teams to have been mentioned and that happens again in Friday’s edition of De Telegraaf. The Dutch newspaper covers Ajax interest and claims the Eredivisie side are trying to get ahead of the competition for his signing.

Manchester City, PSG, Real Madrid and Barcelona are named as the other clubs in the tussle. 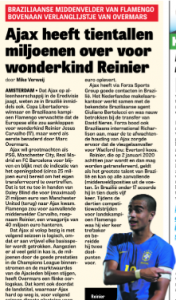 Ajax are so keen they’re ready to break their own transfer record with a first offer of €25m, whereas Flamengo would prefer something closer to €40m.

De Telegraaf say the Amsterdam club’s good links in Brazil should be able to help them in this pursuit.