Signed from Sarpsborg 08 in September for €2m, Ismaïla Coulibaly was immediately sent to Beerschot V.A. in Belgium on loan for the next three years by Sheffield United due to work permit issues.

The Mali U20 international has been used often by the Jupiler Pro League side this season, where he has picked up five goals in 13 league appearances.

The hope from all this will be for the midfielder to earn enough points to get himself a work permit come the end of his spell in Belgium, thus allowing him to feature at Bramall Lane down the line.

It could be the case that said loan will be cut short if Sheffield United have a need for him knowing he’ll be allowed to play in England, but, for now, his mind is solely at Beerschot for the next few years, even with claims of an offer coming in from Milan.

In a long monologue to Sport/Foot Magazine where he reminisced on his short career to date and discussed his future, the 20-year-old explained his situation.

He said: “If I go to the Premier League next year, it will first and foremost be a great compliment for Hernán Losada (his current manager) and my teammates, because it’s thanks to them that I’m progressing this quickly. The manager often takes me to one side to talk details. 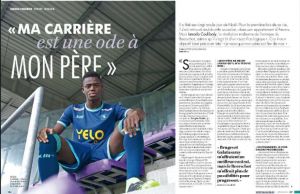 “Here, you give a chance to youngsters and you’re corrected so you can get better. I signed a three year contract, so the aim is to go to the end of it”.

That means that Coulibaly isn’t entirely set on returning to Sheffield United as soon as possible, but he won’t turn it down should the opportunity arise.

After all, he’s still young, has a lot to learn and is happy in a club where he can continue to progress, so you can’t really blame him.