Home Europe ‘Agreement reached’ for Coutinho to Barcelona, €150m to be paid in instalments,...
SHARE

This is it. This is the moment. Sport are convinced Coutinho will be a Barcelona player.

The Catalan newspaper have it on the front page, with two extra pages of coverage inside, with the headline “final straight for Coutinho”.

According to them, the Liverpool star’s agents left Barcelona yesterday after putting the finishing touches to the deal, a contract that would see him earn €12m/year for the next five seasons.

At the same time, his representatives handed over to the La Liga leaders the agreement reached with Fenway Group in Boston stating Coutinho’s price, which stands at €150m. 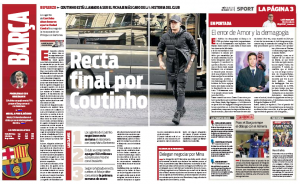 This, for Barcelona, is a step in the right direction, as they now know how much the Brazilian will cost them, something they were never officially told over the summer.

The Catalan club were also told they did not have to pay it all at once, with Liverpool said to be ready to accept the amount in instalments, although how many isn’t revealed. 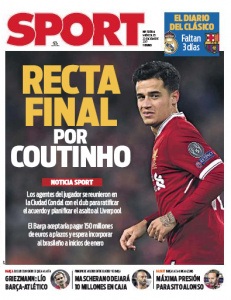 Coutinho’s agents are said to have left Barcelona ‘satisfied’ with the meetings with Josep Bartomeu, who is now having to deal with the La Liga side’s most expensive transfer of all time.

Now that all this is agreed, the Catalan outfit will, over the Christmas period, sort out the payments in order to ensure the first one lands in Liverpool’s bank account come the beginning of January.

Furthermore, players within the Barcelona squad are already aware of how the talks are going, considering they are said to be the ones who asked for his signature in the first place, a present Bartomeu is now ready to give them for Christmas.

It had been five days since we heard anything serious about Coutinho, and we were starting to worry, but Sport have now decided to go big or go home.

We’ll see if this backfires, but they sure do sound very confident about it now.

More than they have done in the past, anyways.