Chris Smalling’s future is in Rome.

That’s how Il Tempo open up their Thursday article on the Manchester United defender, claiming that an agreement between Roma and the Old Trafford side is ‘one step away’.

Smalling is said to have ‘conquered everyone’ at Roma with his performances, and contacts started up again in the ‘past few hours’.

The newspaper explain that an offer of €10m or so has been made, even though they are aware they will need around €15m (probably €12m + €3m in bonuses) to get an agreement.

The first steps have been taken, and with Smalling’s desire to stay in Rome, there is a genuine belief this will get done.

Once the situation between the clubs is sorted, dealing with the defender should be easy, as it’s written the 29-year-old has ‘agreed to reduce his wages’ by at least €1.5m/year. 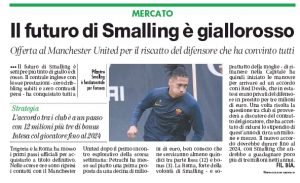 A contract until 2024 is on the table that will see him earn around €3m/year.

It’s worth pointing out that Il Romanista also have a large breakdown of the situation, claiming the first offer was of €10m + €2m in bonuses.

Those figures match Il Tempo’s, and they even say ‘all the premises for the deal to end with white smoke are there’.

All both sides have to do is make a ‘little effort in order to get to the toast, hugs and kisses’ part of the deal, meaning the agreement.