Home Europe ‘The agreement could be close’ – Player has given ‘yes’ on Manchester...
SHARE

AS put their stall out with: ‘Atletico set eyes on Ander Herrera, who is free.
He is one of the club’s objectives for next summer. The priority is to reinforce the midfield.’

Claiming ‘the agreement could be close’, AS state Herrera has been offered a renewal but has so far rejected it.

Atletico have revived old interest in the Manchester United player, and the Spanish newspaper add: ‘The agreement would be close to closing, AS has been able to find out. Simeone would have said yes and the player too.’

Whether to believe any of that is down to the reader, but this is where AS’ claims start to wobble, with the newspaper saying: ‘The interest of Atletico in Ander Herrera is not new. The Daily Mail published the summer of 2016 that he’s a player liked in the offices of the Vicente Calderón and that, in addition, the Basque footballer was not entirely comfortable at Manchester United.’

This is a Spanish newspaper, with good connections to Atletico, quoting an English newspaper article from 2016 about a Spanish footballer and the rojiblancos. In terms of finding something to back themselves up, it’s clutching at straws from AS.

At the bottom of their online edition, the AS article links to when they covered the Daily Mail claims. It was actually March 2016, and the English media claims were presented very much as speculation based on Herrera not being happy under Louis van Gaal.

If this transfer story was a game of Jenga, we’ve just removed an important stabilising piece and the tower is shaking.

Nevertheless, back to the Spanish claims. It’s stated Herrera is once again unhappy because Nemanja Matic has taken his role. When Manchester United have made approaches to Herrere to renew, AS say they’ve been met with: ‘No, no and no.’ 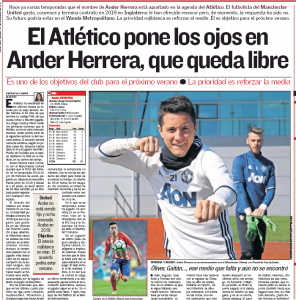 And here things take another strange turn, with it being stated Herrera will be free in June: ‘Unless United come to a last desperate movement: exercise an automatic renewal on him.’

Surely a club protecting their asset with an automatic extension which was agreed from the outset is hardly a descent into ‘desesperada’.

Herrera’s contract runs until June 2018, there’s a belief Manchester United can automatically extend this to June 2019, it would be odd for them not to.

Bringing all this together, Herrera leaving Manchester United wouldn’t be a huge shock, and Atletico Madrid isn’t such a ridiculous idea. The Spaniard simply isn’t at the level he was artificially elevated to by some last season, and if he’s not going to get games then an exit makes some sense, but United letting him go for zilch doesn’t.